From the first weeks of Occupy Philly an announcement for a workshop I helped pull together:

In the past weeks we’ve seen Dilworth Plaza transformed from public, state administered land into what we could call Commons, a dynamic self organized space ruled and governed by ourselves. By November 15 the City wants to begin the transformation of Dilworth Plaza into what many understand will be a privately administered park and seize popular control of land we’ve taken. With starting point of our relationship with Dilworth Plaza, we’ll hear from the experiences of organizers who helped fight for the preservation of public resources like our Rec Centers and Libraries and how the dynamic of public space can shift when people engage in struggle over them. We’ll also look at other fights for control over resources both public and private around the world such as factory takeovers in Argentina, land occupations in Brazil and how workers took over ownership of public transportation and telephone exchanges in revolutionary Spain. And finally we’ll collectively reimagine Philadelphia as commons.

The workshop went well. Some audio from the presentation: 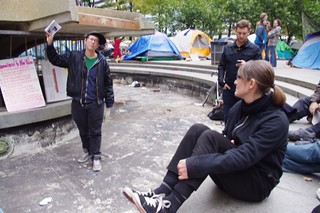